Happy "Made In America" week, everyone! Oops!!!


In a desperate attempt to deflect attention from the ever-widening collusion scandal, President Tiny hands has declared this "Made in America Week." Sounds great, doesn't it? It's an excellent idea (which the Democrats have been pushing for two decades, at least) Buy American is the meme and one that I happily get behind.

Now for the problem -- Of the myriad products in the Trump organization, which includes Ivanka Trump's line of ugly shoes and cheap looking clothing, and the Cheeto Bandito's line of ties, suits, vodka, etc. NOT ONE ITEM IS MADE IN AMERICA. That's right, not one single item. They are mostly made in China, Mexico, Bangladesh, Vietnam and India. 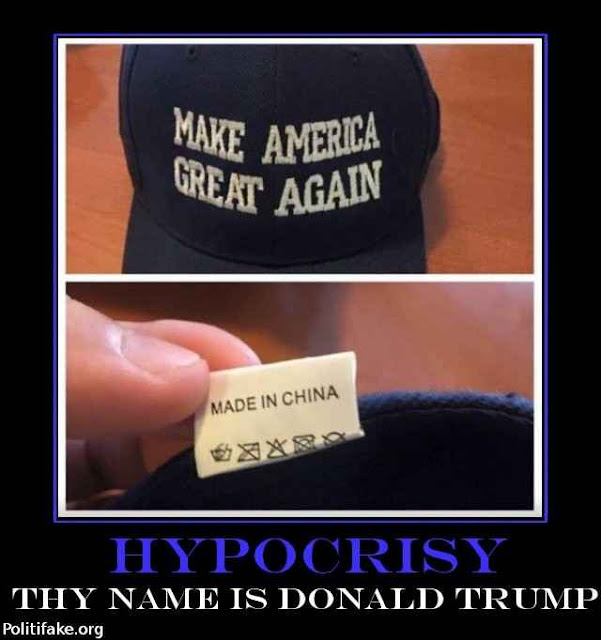 Someone forgot to remind the Cheeto-chump that NONE of his or his vile daughter's crap is actually made in America! Chinese steel was used in his hotels and high rises, and his workforce for those buildings were 80% foreign nationals (and many of them got stiffed for their efforts).  Lucky for him, the suckers bought it and still eat up the garbage he spews.

Ahh Republiclowns - yet more hypocrisy from the party of kooks and scammers..... 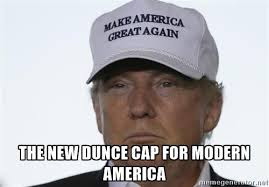 And the embarrassing groveling Ole Donny did for Putin more than proves it. Imagine, if you will, a Democrat, on foreign soil, meeting with our biggest adversary in the world and, instead of confronting them about attacking our entire system of voting, Trump says he's 'honored' to meet the KGB Spymaster and then goes on to trash two former presidents, our entire intelligence machine and our free press! The hypocrites now known as Republiclowns would be running around with their hair on fire screaming about the 'traitor'. But somehow, when it's the cheeto colored moron, they're mute. Some of the fools even attempt to make Tweety McStupid sound like he knows what the hell he's doing! Amazing.

Now, for any of you swamp dwellers who are thinking of spewing on here - you either address the topic of you'll be gone. Got it? Have an adult read it for you if need be....... 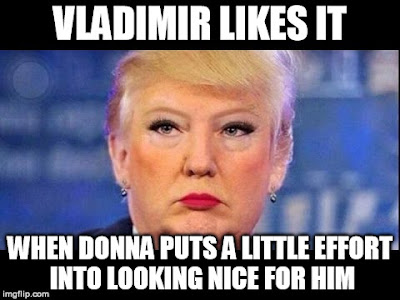 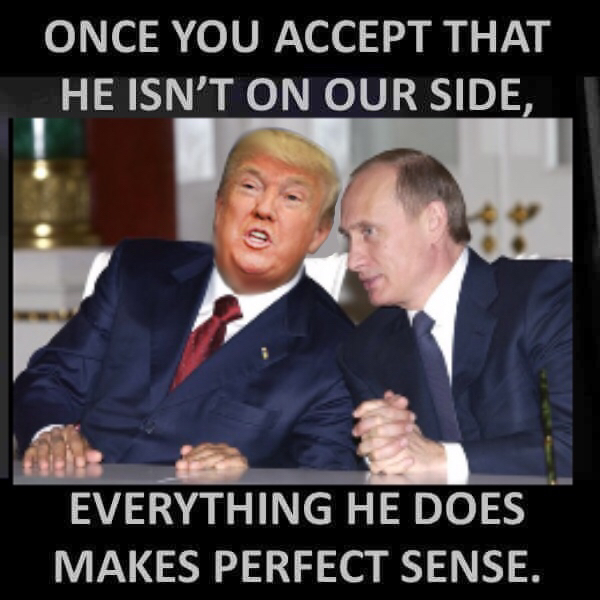 A Funny Thing Happened On The Way To The G20

In an ironic twist for the hotel chain owner, every luxury hotel in town seemed to be booked up. There do not appear to be any Trump-owned properties in the northern German city.
AP 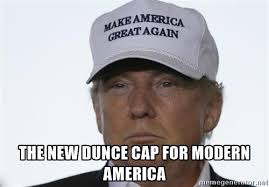 Donald Trump has reportedly had trouble getting a hotel roomfor the upcoming G20 summit in Hamburg, Germany.
His team apparently waited too long to book accommodations for the President and his travelling staff and were told none of the major hotels had vacancies, Buzzfeed reported.
The local newspaper Hamburger Abendblatt reported that the Four Seasons had to turn him away as they were full.
Buzzfeed did some digging and found that King Salman of Saudi Arabia and his massive entourage are staying at the Four Seasons as well two other high-end hotels.
Russian President Vladimir Putin is staying at the Park Hyatt and German Chancellor Angela Merkel will make camp at the Atlantic Kempinski with India and Canada.
However, the Hamburg government's Senate House will reportedly host him, while staff will likely stay at the US Consulate there.
Posted by anymouse at 4:38 PM 11 comments:

The Massive Hypocrisy Of The Trump Voters 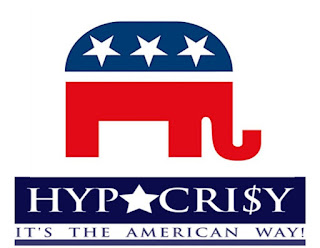 (CNN)Many Donald Trump supporters are expressing outrage with The Public Theater's production of "Julius Caesar" because it features a President Trump-like Caesar.
In fact, one Trump supporter rushed the stage in Central Park on Friday night in an effort to stop the show -- claiming those behind the production have "blood on their hands because it contributes to the overall desensitization of violence." The play depicts the Trump lookalike being stabbed to death.
The protester documented her actions on Periscope.
After she was arrested, prominent Trump supporters tweeted their defense of this attempt to silence the play. Ironic to see this response, given that many on the right are so often outraged when college students interrupt or try to silence political views they don't agree with.
In any event, the person who stormed the stage was far from the only one on Team Trump going after this production of Caesar. Trump's cheerleaders-in-chief Newt Gingrich and Sean Hannity also railed against the production, claiming it incites political violence.
But targeting this production of Caesar is the soul of hypocrisy. Where was this outrage in 2012 when a Minneapolis production of "Julius Caesar" starred a Barack Obama-lookalike as Caesar?
The conservative publication "The American Conservative" reviewed the play at the time, explaining in no uncertain terms that this Caesar was clearly intended to be Obama while praising the production as "riveting."
And where was the outrage in 2015 when the Trinity Repertory Company in Providence staged the headline-grabbing production of "Julius Caesar" that featured a middle-aged female Caesar wearing a pantsuit who was stabbed to death? Media outlets at the time, from NPR to reviewers, noted that this production was clearly intended to evoke Hillary Clinton. 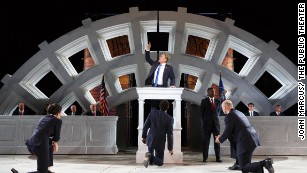 Trump as Julius Caesar -- What could go wrong?
We could possibly forgive this lack of consistency if the Trump supporters had at least called out their candidate when he explicitly called for and defended political violence on the campaign trail on various occasions. Some of the most alarming examples include Trump's words after one of his fans beat up a protester, "I thought it was very, very appropriate." Trump shockingly added, "And that's what we need a little bit more of." At another event Trump reminisced about the "old days" where protesters would "be carried out on a stretcher."
Candidate Trump even offered to provide legal fees if his supporters would attack people in his name, "If you see somebody getting ready to throw a tomato, knock the crap out of them, would you?" Trump added, "I promise you, I will pay for the legal fees. I promise."
Let's be blunt: Trump's words inciting his crowd to beat up protesters and then publicly defending their actions was, and remains, far more dangerous than any reinterpretation of a Shakespearean play. And to be clear, Shakespeare's intention with this classic play is not to make light of killing leaders but is actually a cautionary tale about "the costs of political violence." This is truly the opposite of Trump's own words on the campaign trial where he expressly called for political violence.
Yet can you recall Trump supporters protesting his incitement of political violence and streaming their protest on social media? I can't. But I can recall them cheering and actually attacking people in response to his words.
In fact, there's a federal lawsuit currently pending against Trump and his campaign by protesters injured by Trump supporters at a Kentucky campaign rally after Trump yelled, "Get 'em out of here." Just two months ago a federal judge ruled the lawsuit could proceed, noting that Trump's words -- "Get 'em out of here" -- "at least implicitly encouraged the use of violence or lawless action."
And if Trump supporters were sincerely upset by those who employ violent imagery in a political context, they should've been screaming in April when Ted Nugent visited the White House. After all, in 2016, Nugent declared that Barack Obama and Hillary Clinton "should be tried for treason & hung."
Nugent also called Obama "a piece of s***" and declared that the then-President should "suck on my machine gun."
Follow CNN Opinion
Join us on Twitter and Facebook
But not a word from these Trump supporters about Nugent's despicable violent imagery. At least Nugent belatedly seems to get it; he announced after the horrific shooting of Congressman Steve Scalise earlier this week that he would no longer use such "harsh" terms, saying, "we have got to be civil to each other."
If Trump supporters are really worried about political violence, they should begin by urging the President to admit that his actions and words on the campaign trail were destructive and wrong. Anything less sends a message that those who support him are more concerned with shutting down a play because they oppose its content than with reducing political violence in America.
Posted by anymouse at 4:03 PM 5 comments: