On Wednesday night, Donald Trump dropped the biggest flip-flop of his entire campaign by walking back his harsh immigration stance. Instead of sticking with his mass deportation plan — which won him many supporters — Trump declared his intent to only boot the “bad” immigrants. As for the “good” ones, he thinks “we can work with them” as long as they pay back taxes and don’t mind the Wall, which will still be built. And the responses from Trump allies haven’t been surprising. Ann Coulter unleashed a tweet storm to mock her candidate’s reversal. Then spokesperson Katrina Pierson trotted over to CNN and (as usual) denied everything.
By now, cable news show hosts know what to expect from Pierson, and Erica Hill was up for the challenge. Her job was to keep a straight face while the others (including Ted Cruz ally Amanda Carpenter) freely laughed as Pierson insisted that Trump hasn’t “changed his position on immigration, he’s just changed the words he’s saying.” Hill gently tried to tell Pierson that, yes, “This is a shift, a flip-flop, whatever words you want to use … there is a definite different message that we’re hearing now.” Instead of the promised mass deportation of 11 million immigrants, Trump decided that would be too hard on people, so he’s gonna play nicer. That’s a huge change.
But Pierson was adamant that Trump is still saying exactly what he’s been saying all along, and Trump has simply grabbed a metaphorical thesaurus because “Everyone on the news is saying that he is a bigot and that he is a racist because of the words he uses.” And she said that Trump will continue to follow the law and “start with the criminals.” Once again, Pierson is simply sound and fury, but perhaps, in a roundabout way, she’s giving a clue to why Trump decided to call Hillary Clinton a “bigot” on Wednesday. Because if he labels her one, maybe folks won’t use that word to describe him again? Perhaps it’s best not to overthink this one.
I can't stop chuckling! 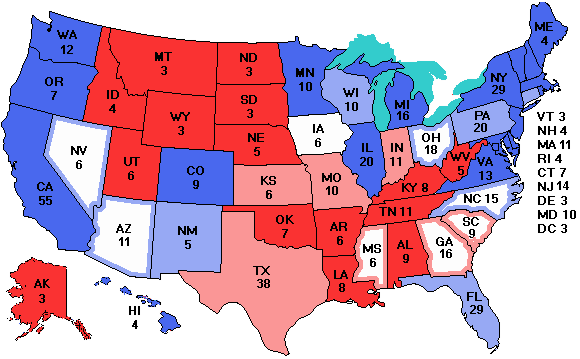 While it's looking like the landslide most of us predicted, we CAN NOT sit back and become complacent. The Senate also looks like a win for us but, there again, we have to keep working until it's a sure thing. Wouldn't 60 votes in the Senate be wonderful? It can happen if we keep working hard!

The Repubs know they'll lose many House seats - probably not enough for us to recapture the House this election due to redistricting, but enough to stop the idiotic poison pills the Repubs keep shoving into unrelated bills and to overcome the obstructionism which has helped fuel the public's disgust with Congress.

Remember that Conservatism failed partially because the radical right got too cocky and arrogant (and mostly because it just didn't make sense and, as history more than proved - IT DIDN'T WORK). Let's not make that same mistake.
Posted by anymouse at 2:17 AM No comments:

The Party Who Cried Wolf! More than 25 years ago, America was introduced to Hillary Rodham Clinton, wife of an upstart small state Governor from the deep South and an accomplished lawyer in her own right. The couple had a young daughter and were obviously highly motivated to move upward in the rough and tumble world of American partisan politics.

From the start, Hillary Clinton wasn't the normal political wife of the early 1990's. She was accomplished in her legal career and was not content to sit in the shadow of her husband. Perhaps that's what first turned the right against her - the fact that she wasn't the typical purse-in-lap-lips-smiling-while-hubby-talks political wife. She'd taken the Betty Ford or Barbara Bush mold and stretched it to include working women and modern feminists.

Whatever it was, the right immediately began to plot the downfall of Bill and Hillary Clinton. They attempted it the exact same way they always attempt things when they have no actual evidence on their side -- they launched snide, unfounded and often outright absurd 'scandals' through their right wing media puppets until the corporate news stooges began to repeat the 'scandal du jour' from the radical right. You see, since the right usually can't convince the majority to elect them, they have to try and end run around elections to label and attack any and all Democrats. For years, that worked for them, too.

The actual list, were it to be all inclusive is FAR longer, actually. Basically, every time some right winger had a bad hair-day, Hillary was to be the culprit. Endless 'investigations' by the House and Senate provided a constant drip of insecurity for voters. Sadly, for the right wing, not a single one of these billion dollar wastes of tax dollars ever resulted in any finding of wrong-doing by Hillary. No problem, it was just tax dollars they were wasting - the right wing wasn't concerned so long as they could continue tarring the Clintons with every whacked out, idiotic conspiracy they could think up.

One of the more bizarre and irritating accusations made against Hillary Clinton was that she stood by her husband and they worked through his womanizing. (Maybe they still are - I don't care and nobody else should except for them, actually). The party that was, at that very time, telling people to pull themselves up by the bootstraps was finding fault with a woman for not turning away from her marriage! Especially now, knowing what we know about the majority of Republican officials on the attack and how many of them were actively cheating on their wives at that same time, one can only marvel at the lengths of hypocrisy the right contorts itself into in their pursuit of misogyny!

So now that Hillary is very far ahead in the polls, and VERY likely to win the election, no doubt these same right wing goons will double down on looking for some new 'scandal' to lay at Hillary's feet. We know they are in bed with the Russians and that their boy Trump is Putin's butt boy, so no doubt they'll get help from the old guard of the KGB in manufacturing some new and Earth-shattering 'scandal' with which to bring down their most feared enemy once and for all. Yeah, keep dreaming righties - with Trump as the alternative, there's almost nothing one can think of that will do what you would like.

See you at the polls, Wingnuts and teabaggers and the racists and Nazi's who are backing Trump. Oh and don't forget; "Benghazi, Benghazi, Benghazi!!!!" I hear it's required for you to repeat that twenty five times an hour or Breitbart will haunt you. Did Hillary kill him too, btw? Better burn through a few more million tax dollars 'investigating' that!!!