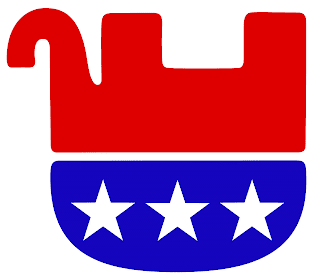 Government Of Putin
From now on, that will be the name the Republiclowns will be known by.

The fricking hypocrites who screamed and cried about president Obama 'bowing down' to foreign leaders looks the other way when Putin's Buttboy Trump gives him a happy ending on national TV and slams our own intelligence agencies.

The fricking hypocrites who shouted out in anger about 'government intrusion' and 'let business take care of business' and are still upset at the bail-outs (which saved countless jobs and the American Auto industry was PAID BACK with INTEREST) are now more than happy to wave a flag and gush about trump spending 7 million tax dollars in a bribe to keep 700 jobs in Indiana.

I cannot even believe what I'm hearing from the radical right. I've never been more disgusted with a bunch of people in my entire life. Do they even hear themselves or are they so far gone into the right wing bubble that making sense is no longer a desirable thing?

From Russia With Malice 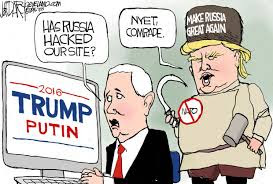 Let’s be completely honest, America: we’ve just been handed an election result that was hand-picked, paid for, gift-wrapped, and delivered by our committed comrades from across the sea.
And while the recipient of that noxious gift-giving, Donald Trump, sniffs that we should reject the bombshell findings released this weekend and just allow him to get on with the task of “making America great again” (colluding with foreign dictators apparently part of his protocol), the rest of us are left wondering just how much more it will take for the powers-that-be in this country to declare Election 2016 to be null and void. Fraudulent. Manipulated. Corrupt. Unacceptable.
It’s one thing to shake our heads and parse the fact that Hillary Clinton beat Donald Trump by as many votes as President Obama won in 2012 but is still considered “the loser” (which should make abolishing or amending Electoral College rules a priority). 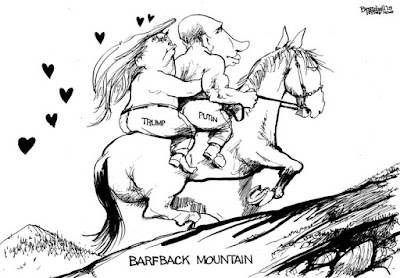 It’s one thing to review the unprecedented and outrageous move of FBI Director James Comey to, right before the election, make ultimately pointless claims of more email trouble for Clinton (how has he not been sanctioned for that?), and feel outrage that this shattered her then-12-point lead and likely aided Trump’s win.
It’s one thing to consider the daily, weekly, monthly drip-drip-drip distraction (and fodder for haters and conspiracists) from Wikileaks and their sleazy founder Julian Assange (still in hiding from law enforcement over sexual assault charges), and question why they only targeted Democrats and how much their biased hackery impacted the election.
It’s one thing to consider the possibility that Russian actors were behind that hackery and likely had a hand in manipulating what got released and when, and ponder the heinous thought that our election itself might have been hacked at the behest of foreign interests and preferences.
It’s one thing to grasp how much fake news — much of it directed by Russia — with its bilious lies directed particularly at Hillary Clinton — misguided and misinformed the electorate, and feel churned by the fact of America’s gullibility.
BUT IT’S A WHOLE OTHER THING to read the bombshell reports that have come out this weekend:
Now the intelligence community has concluded that Russia was clearly after a Trump victory and manipulated information to that end, according to sources who spoke to the newspaper.
“It is the assessment of the intelligence community that Russia’s goal here was to favor one candidate over the other, to help Trump get elected,” a senior U.S. official briefed on the CIA assessment told The Washington Post. “That’s the consensus view.”
Every single thing about that should stir waves of anger and revulsion, brandish red flags so voluminous they’re canopies; ring alarm bells far, wide, and loudly across the entire United States of America. In all our myriad doomsday imaginings, in all the conspiracy theories and Cold War drills, fears of invasion and terrors related to “The Russians are Coming,” what is patently clear at this moment is that the Russians came and they chose our next president.
And that cannot stand. In addition to the other election corruptions listed above, this is an unequivocal tipping point. This should not be a partisan issue; this should not be about Hillary Clinton or Donald Trump; this should be about the fact that a foreign power, led by a dictator from a country rife with human rights abuse issues, a country that is a declared “enemy” of America, a country that is hellbent on defying international law in its encroachments; this country just got up close and personal with our domestic presidential election and coerced it in favor of its preferred candidate.
Russia’s preferred candidate lost the popular vote.
Russia’s preferred candidate is Donald J. Trump.
Russian’s preferred candidate cannot be our next president.
That Russia worked so nefariously to tilt this election, and succeeded in doing so, cannot be dismissed along with Comey, Wikileaks, fake news, etc. It makes the election’s results null and void. Our country’s leadership, law enforcement, Homeland Security, and every single one of its citizens should agree with that thesis. Whatever we are or are not, America is a free and democratic nation. If we are forced to accept election results that are fraudulent, manipulated, and corrupt, there will be no uniting behind this president.
He may be Russia’s choice, but without winning an unassailably honest election in America, by Americans, he will not be ours. 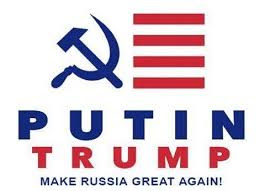 Share 24523
Share on FacebookClick me! Share on TwitterClick me! Copy Link
via Flickr user (cc) Gage Skidmore
There’s a growing group of Americans who are starting to regret voting for Donald Trump and he hasn’t even taken the oath of office yet. One has to wonder what these people were expecting. On the campaign trail, Trump flip-flopped on most of the major issues, including: abortion, immigration, his relationship with Vladimir Putin, a Muslim ban, defeating ISIS, the minimum wage, taxes, climate change, the Iraq war, the KKK, and nuclear proliferation. So it shouldn’t come as a surprise to anyone that he’d change course on most of his policies after being elected.
A tumblr user has compiled the tweets of Trump supporters who are beginning to rethink their decision on a blog called Trumgrets. The blog gives Trump detractors some post-election solace and the joy of mumbling, “I told you so,” to themselves as they scroll.
Trump made a huge campaign promise to “drain the swamp” of Washington special interest groups and lobbyists after being elected. But the moment he was elected, Trump began stocking the swamp with Washington insiders and chose 17-year Goldman Sachs vet, Steven Mnuchin as Secretary of Treasury.
As eager as the Democrats have been to give people healthcare, Republican Speaker of the House, Paul Ryan, has been trying to take it away. Reports show that Trump may turn Medicare into a voucher system, greatly reducing healthcare coverage for America’s seniors and the disabled.
Trump accepted a call from Taiwan’s Tsai Ing-wen, breaking a 37-year diplomatic silence and riling Chinese leaders.
Trump has gone back on his promise to prosecute former Democratic rival, Hillary Clinton.
Some people really thought he was going to build a wall and Mexico would pay for it.
Some Trump supporters are feeling general regret for supporting a lunatic.